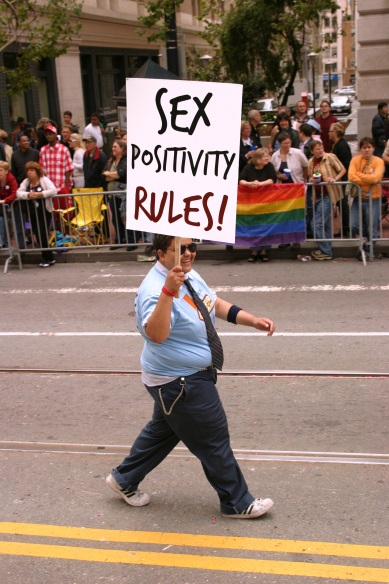 Though the phrase “sex positivity” is over 40 years old, it’s been seen a lot more frequently lately- however, with less and less context as to what it actually means.

The term “sex positivity” has been used as a way to acknowledge that human sexuality is diverse and broad. When it comes to sex under a sex positive lens, there is no one definition of "normal”- it’s non-judgmental, and asks us to be aware of (and be in control of) own our judgements.

If anyone tries to use the notion of sex-positivity to judge someone else's sexual orientation, gender expression, sexual choices, or sexual response, they are not behaving in a sex-positive fashion. Period.

When you are sex-positive, you get that not everybody gets down like you may- and that's OK. As in,

What would it take for our culture to be fully sex-positive? What are the elements that would get us there? How can we access true respect for other people's sexualities?

We invite you to think about that question–it is a valuable lens in a personal context and in activist work, and while we continue to unlearn and re-learn—to help make our culture a bit more sex positive every day.

Content derived from Dr. Carol Queen’s “What Sex-Positivity Is--- And Is Not” with consent from the Author. Read the original piece here.