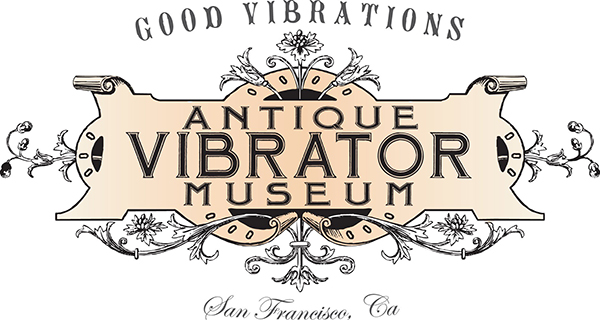 About Our Museum
Good Vibrations' founder, Joani Blank, collected antique vibrators for over 20 years. We display her treasures alongside our company collection on-line and occasionally in both our San Francisco and Brookline stores, and the vibes in our collection date from the late 1800s up through the 1970s. The electric vibrator had its inception in 1869 with the invention of a steam-powered massager, patented by an American doctor. This device was designed as a medical tool for treating "female disorders." Within 20 years a British doctor followed up with a more portable battery-operated model; by 1900, dozens of styles of electric vibrators, just like those in our exhibit, were available to the discriminating medical professional.

Treating Hysteria
Physicians employed vibrating devices in the treatment of "hysteria," which they viewed as the most common health complaint among women of the day. Hysteria was a medical term developed to describe a woman's display of mental or emotional distress, behavior then considered a disease in need of treatment. Though the existence of hysteria as a disease was debunked by the American Psychiatric Association in 1952, medical experts from the time of Hippocrates up to the 20th century believed that hysteria expressed the womb's revolt against sexual deprivation. Genital massage was a standard treatment for hysteria; its objective was to induce "hysterical paroxysm" (better known as orgasm) in the patient. Such treatment demanded both manual dexterity and a fair amount of time, so turn-of-the-century physicians were delighted with the efficiency, convenience and reliability of portable vibrators. In light of hysteria's historical legacy, we can see that classifying hysteria as a disease was a refusal to acknowledge female sexuality as a human trait on par with male sexual functioning, as well as a refusal to recognize orgasm as a normal function of female sexuality.

A Superior Sex Toy
To this day, electric vibrators are marketed solely as massagers -- and battery vibes as novelties -- while manufacturers steadfastly ignore their sexual benefits. vibrators are now a big business; they are sold through drug stores, department stores and even the Sears catalog! Here at Good Vibrations, we dream of the day when all vibrators are proudly promoted as the superior sex toys they are. After all, as a vintage advertisement claims, "almost like a miracle is the miraculous healing force of massage when rightly applied."